Whale sanctuary in the southwest coast of Tenerife

An archipelago in the middle of the Atlantic Ocean has to be, by force, a good place for the sighting of a great number of cetacean species, among them, whales. Diverse migratory routes, depths up to 3000 meters, marine currents, tropical climate, warm and calm sea… all these factors help these extraordinary marine mammals to visit and choose the waters of Tenerife as a place of passage, destination and home. From BIOSEAN: Whale Watching and Marine Science we want to introduce you to the world of whales and accompany you to live an unforgettable experience… do you want to know more? 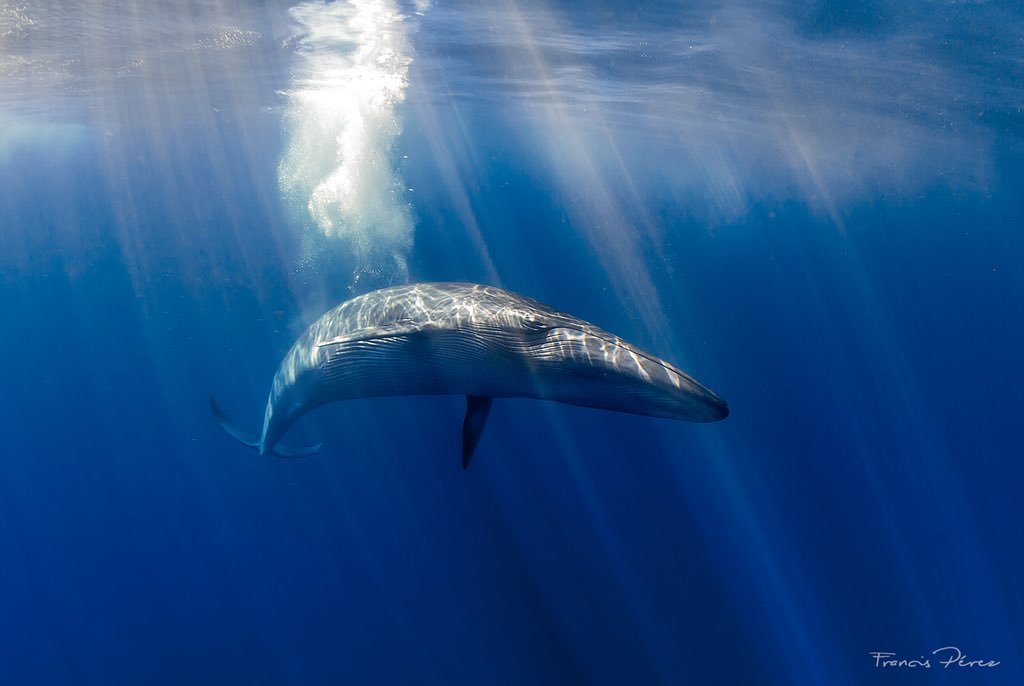 The geographical position of the Archipelago, its volcanic origin, the transparency and temperature of its waters and the constant influence of various marine currents are some of the factors responsible for the great biodiversity of the Canary Islands. The richness of the seabed is a powerful attraction for large marine mammals, which come to the islands attracted by the variety of food and nutrients they find.

More than a third of the world’s known cetacean species have been sighted in the marine waters surrounding Tenerife and La Gomera. For this reason, both islands have recently been distinguished as a Whale Heritage Site by the World Cetacean Alliance (WCA), an international organization that works to protect whales, dolphins and porpoises, fighting against the captivity and exploitation of cetaceans. This distinction is the first to be awarded in Europe and the third worldwide, after Hervey Bay (Australia) and The Bluff (South Africa).

This same international organization awarded BIOSEAN: Whale Watching and Marine Science the Responsible Whale and Dolphin Watcher Certification, the only international label that distinguishes whale watching organizations that “operate with the highest standards of care for local wildlife, sustainability and customer experience“. So now you know, if you want to embark on an adventure to meet these amazing animals, but you want to do it in a respectful and sustainable way… We are definitely your team!

The home of these cetaceans is located in the marine strip previously designated in 2011 as a Special Area of Conservation (ZEC) by the Natura 2000 Network, which runs from El Fraile, in Teno, to the tip of Rasca, in Las Galletas, covering about 22 kilometers in length. This area is not only home to a large number of resident species of cetaceans, seabirds, turtles and elasmobranchs (sharks and rays), but also forms part of an important migratory route for baleen whales and sperm whales. During practically the whole year, different species of migratory whales can be observed on the southwest coast of Tenerife: fin whales, fin whales, humpback whales, northern minke whales, blue whales and minke whales, ordered by frequency of sightings. It is no coincidence that National Geographic has recently listed the Canary Islands as one of the ten best places in the world to see whales in their natural environment.

Still haven’t convinced you to come and see them?

Few sensations are comparable to seeing a whale swimming in the wild. Their magnitude and majesty, together with the parsimony and calmness with which they take their deep breaths, are capable of making anyone feel small… But what do we really know about these large animals?

They are mammals belonging to the cetacean order, which also includes dolphins and porpoises. Generally, we tend to call any large cetacean a “whale”, but this is not entirely correct. Whales themselves have baleen, unlike dolphins, sperm whales or killer whales, which have jaws equipped with teeth. Baleen is an essential feeding tool for whales. While swimming, they fill their huge mouths with water and, with the help of their throat muscles and tongue, push out the water, keeping only the food trapped between the baleens. We could say that they travel with a huge comb in their mouths that continuously filters the ocean water; they can have from 100 to 400 baleen depending on the species! 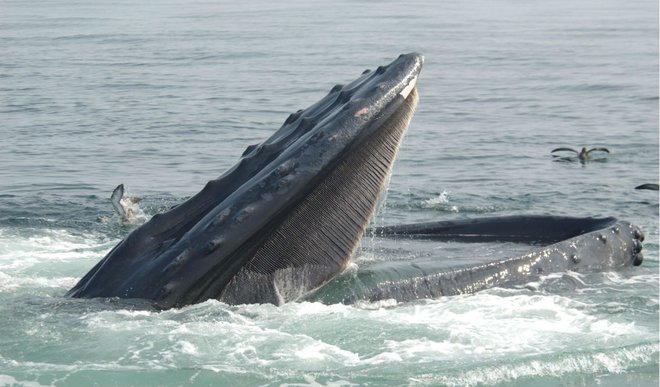 Don’t forget that they are mammals, and the presence of lungs instead of gills limits their ability to breathe underwater. Instead, they come to the surface every so often to breathe through their blowholes, which are located on the top of their heads. Generally, whales have two blowholes, while other toothed whales have only one.

Did you know that whales sing to communicate? 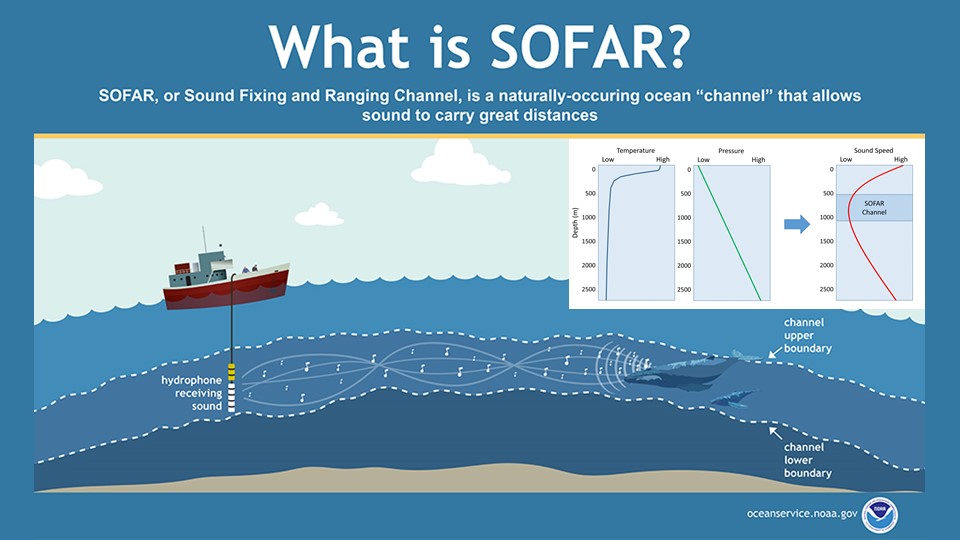 Unlike other cetaceans, whales lack the structure necessary for echolocation, which we discussed in one of our previous articles. Instead, they emit a series of grunts, whistles and howls underwater at low frequencies, capable of traveling long distances. Specifically, they do so through a region of the water column known as the “SOFAR channel“, which acts to rapidly disperse the sounds. They can create real songs! In fact, many artists have been inspired by their melodies to create their own sound pieces.

But if whales are known for something, it is for their long migrations of thousands of kilometers, crossing the entire planet. Except for the Bryde’s whale, which stays in warm waters all year round, all baleen whales make north-south and south-north migrations in search of the best breeding and feeding grounds. During the breeding and calving season, which takes place in winter and spring, they live in warm waters. When summer arrives, they migrate to cold waters in search of food, when the ice in the polar areas melts and generates an explosion of life. Their favorite delicacies, krill and copepods (small crustaceans), become available in large quantities, like an open buffet. 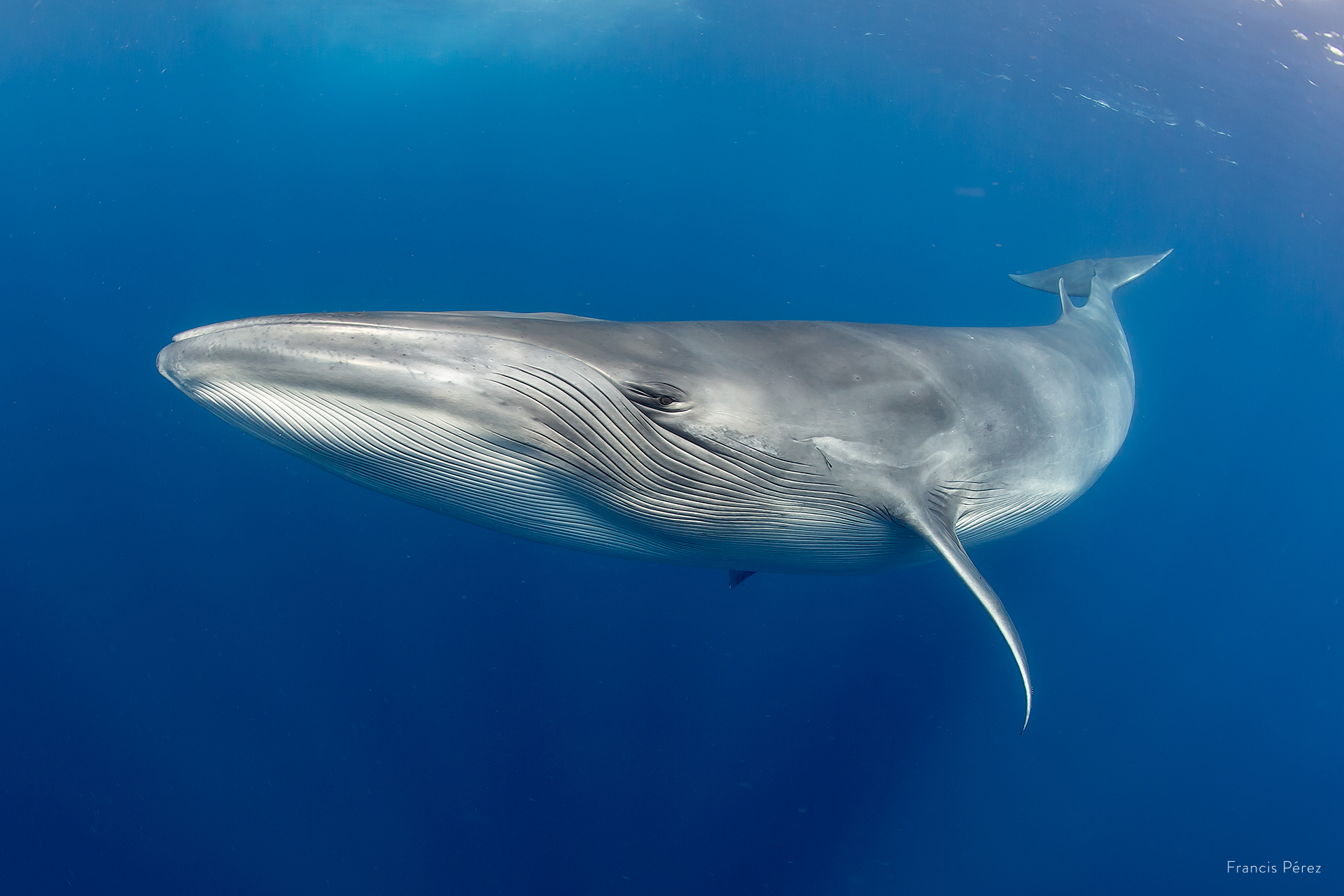 Although baleen whales are known to be migratory species, the Bryde’s whale is considered a sporadic species in Tenerife, that is, it is a regular visitor to the archipelago throughout the year. Others, such as the fin whale or the northern fin whale, are seasonal and arrive in Tenerife at the beginning of the summer. The Asociación Tonina, with which BIOSEAN collaborates, has a detailed catalog of photo-identification of fin whales sighted in the island, we encourage you to take a look at it!

Next, we would like to tell you about the species of visiting fin whales that, with a bit of luck, you will be able to see on one of our boat trips. Even so, we must not forget that we are in the natural environment of these cetaceans, a sanctuary and not a zoo. It depends on the animals themselves whether they want to be shown or not. But… isn’t that exactly what makes these excursions special?

Bryde’s whale (Balaenoptera edeni): This is the most frequent species of whale in our whale watching trips. It differs from other whale species by its dark bluish-gray back in comparison with its light neck and belly. In addition, it has three dorsal ridges in the space between the blowhole and the tip of the head. It is the second smallest fin whale, with an average length of 12 meters.

Fin whale (Balaenoptera physalus): This whale, which can reach 27 meters, is the second largest animal on the planet, after the blue whale (Balaenoptera musculus). So, if you come across it on one of our tours, we promise it will be quite a spectacle!

Humpback whale (Megaptera novaeangliae): It is distributed in almost all the oceans and seas of the world. It is known for its large pectoral fins, which can measure up to 5 meters… they look like real wings! Its name refers to its characteristic habit of arching its back before diving. They can reach 18 meters in length and weigh 40 tons.

Sperm whale (Physeter macrocephalus): Remember that the sperm whale is not a whale! It is a cetacean that, instead of baleen, has teeth. The sperm whale has striated skin, a giant head and a very small dorsal fin in relation to the body. Some specimens weigh up to 60 tons and reach 18 meters in length. In addition, the sperm whale is a true natural diver: it can dive for 60 minutes to satisfy its nutritional needs.

If you want to know the marine treasures of the waters of Tenerife, join us and enjoy an incredible and sustainable experience. You can check out our activities and take a look at more articles like this one on the BIOSEAN website. Find out why we are internationally certified for whale watching in Tenerife by visiting our social networks: YouTube, Facebook, Instagram, Twitter and LinkedIn.