Anyone who has been lucky enough to enjoy whale watching on the island of Tenerife, undoubtedly knows one of the most commonly observed species in these marine excursions, along with pilot whales: the bottlenose dolphin. These exceptional, friendly and endlessly curious animals, which inhabit warm and temperate seas all over the world, have found in the Canary Islands a natural refuge to live.

The bottlenose dolphin (Tursiops truncatus) is a species of odontocete cetacean of the family Delphinidae, the largest of all true dolphins (excluding the killer whale and pilot whales): it can reach 4 meters in length and weigh half a ton, although the individuals of the resident populations in the Canary Islands are somewhat smaller. It is a very common visitor in Biosean‘s (@biosean_) boat trips, it loves to show off in front of the visitors and to sail in the wake left by our boat.

Want to learn a little more about this charismatic animal? We encourage you to read on!

Bottlenose dolphins are usually found swimming or hunting about 2 or 3 miles from the coast, where we usually make our trips. Groups of up to 30 or more individuals can be seen, including females with calves! Sometimes they make their trips in mixed groups accompanied by spotted dolphins (Stella frontalis) and common dolphins (Delphinus delphis). On the surface, accompanying the herd in the hunt, we can also see individuals of sea birds such as the Cory’s shearwater and yellow-legged sea gull.

The bottlenose dolphin is at the top of the list of the best known cetacean species, due to its roles in movies and its involuntary presence in many dolphinariums. However, the number of individuals in the wild has been depleted due to the deterioration of their natural habitat, water pollution and interaction with human activities such as fishing. In addition, whale watching that does not comply with established whale watching regulations can affect the dolphins’ behavior and increase their stress, increasing the likelihood of collisions.

How can I tell the bottlenose dolphin from the rest of the dolphins? 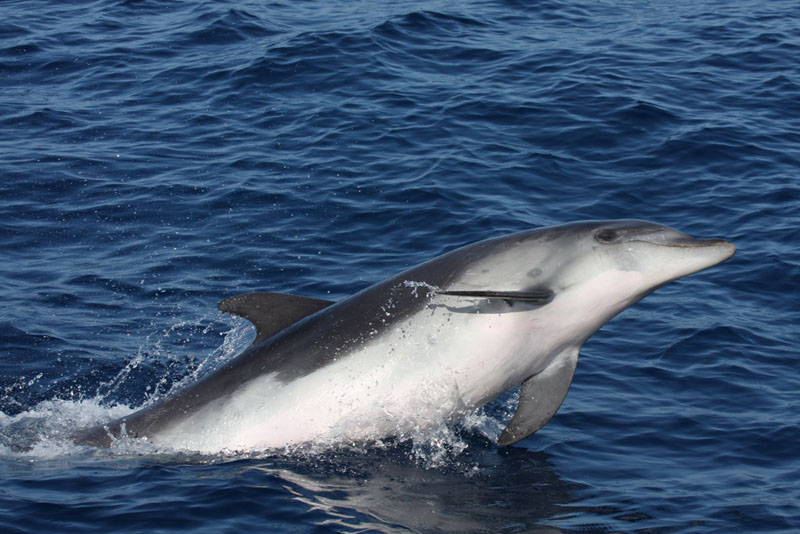 When you are on the boat and a group of dolphins approaches to look around, pay attention to a series of details that will help you recognize the bottlenose dolphin among all dolphin species. In addition to its marked snout, as its name indicates, during the swim at the surface we can see the dark gray color of its back. If we are lucky and it is relatively close to the boat, we will be able to appreciate the light gray of its sides and, in its lower part, practically white colorations. Anyway, if you have doubts in the identification, you can always ask any Biosean staff member who is on the boat, we will be happy to help you!

Do you think that the coloration they adopt is a coincidence? Not at all!

This color pattern acts as a marine camouflage for both their predators, the sharks, and their prey. When you are at the bottom and try to spot the dolphin from below, there will be no contrast between the light coming in from the sea and the animal’s belly. If, on the other hand, the dolphin is on the bottom, the dark gray back will merge with the color of the seabed. Other marine animals, such as turtles, also use this camouflage strategy.

It can be somewhat complicated to identify specific individuals, since dolphins, like most cetaceans, spend most of their time underwater and, when they surface, only show a small part of their body. For this reason, photo-identification, which consists of photographing the marks and scars on the dorsal fins, is a very useful tool to know which individual it is.  The Asociación Tonina , an association dedicated to research, dissemination and conservation of the marine environment which Biosean collaborates with, has a PhotoID catalog of bottlenose dolphins, pilot whales, beaked whales and fin whales sighted on the island of Tenerife: a real jewel of marine conservation!

Echolocation: the superpower of some cetaceans

If we were asked what a bat, a dolphin and a sperm whale have in common, the answer would be clear: all three are mammals with the ability to echolocate.  But what does echolocation consist of?

Bottlenose dolphins, like the rest of the dolphins, have this curious and ancestral system that works as a prey detector, a self-defense technique (to avoid being part of the menu of other predators…) and an excellent tool to orient themselves in their immense habitat: the ocean.

Echolocation works in a very simple way: the animal emits a sound 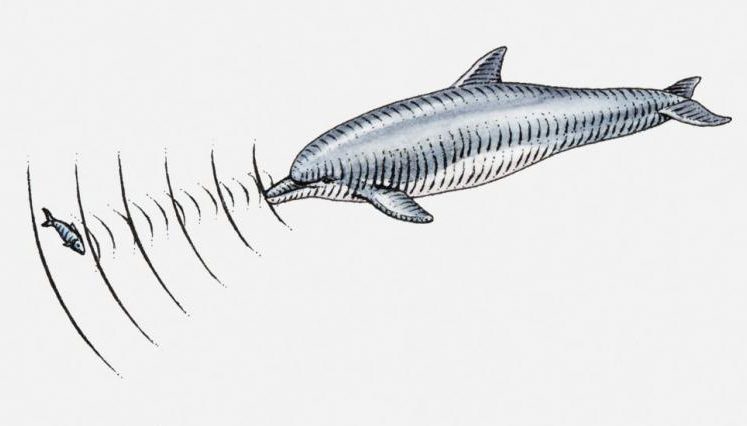 that bounces back when it encounters an obstacle. The bouncing sound gives rise to the echo, which is heard and analyzed by the animal to estimate the size and distance of the obstacle: the closer and larger the obstacle, the louder the echo. The sonar used by ships and submarines is based on this simple principle. It is a very useful strategy to use in the ocean, due to the absence of light compared to the surface and the speed at which sound travels: up to five times faster than in air.

It is well known all over the world: dolphins are very attractive and charismatic animals. And not only we think so, they themselves also seem to know it, and sometimes demonstrate it with their multiple acrobatics and pirouettes when our boat meets them. Among the most common surface behaviors are:

In addition, underwater, they also have incredible underwater skills. They usually swim at a speed of 5 to 11 km/h, but when hunting or running away from predators they can reach 35 km/h in a short time. If there is something that drives them crazy, it is fish and cephalopods, such as ocean squid. However, they are generally very opportunistic animals and take advantage of any easy and abundant resource, without complications! If we compare them with other cetaceans such as pilot whales or beaked whales, diving is not their strong point… They can last at most about 8 minutes under the surface.

However, as friendly as these animals are, we can also find aggressive behaviors: there is a strong rivalry not only between males of the same group, but also with the dominant individuals of other dolphin groups, and sometimes they fight, bite and ram each other when competing for females or food. Sometimes, if during boat trips a group of bottlenose dolphins is approached by adult males, we can observe marks and scars along their bodies as a result of these interactions and confrontations.

What is the proper conduct to follow in case of a possible approach to bottlenose dolphins?

The southwest coast of Tenerife is considered one of the best areas in Europe to enjoy whale watching in the wild. Hopefully, if you go on an excursion with Biosean, you will enjoy the opportunity to see these amazing animals in total freedom, following their jumps and bow rides, but remember to always treat them with due respect! Bottlenose dolphins represent one of the great jewels of the waters.

Such is their importance that, in the Canary Islands, the European Union has designated some marine protected areas called “Zonas de Especial Conservación (ZEC)” for the presence of this and other species, as part of the EU conservation network called NATURA 2000.

Biosean: cetacean watching and respect for marine wildlife and the environment 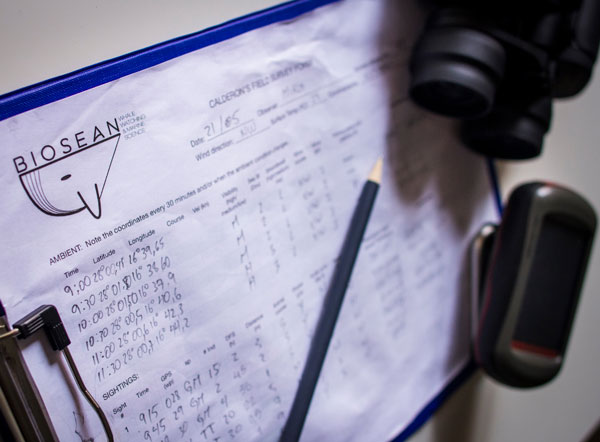 Biosean brings together two very important concepts, which, at first sight, may seem to have nothing to do with each other: tourism and science. During the boat trips for whale watching with tourists, Misael (@misael.morales.vargas), head and founder of Biosean, is able to collect a lot of data about the behavior and frequency of sightings of the different cetaceans sighted during the trips. In this way, we collaborate with many marine conservation projects, financing science through tourism and collaborations with universities and research centers.

In addition to boat trips, Biosean offers guided dive trips to the best dive sites in the south of Tenerife and internships for biology and marine science students. During the months of their stay, Biosean interns learn about the local marine fauna, the protection status of the ZEC Teno-Rasca Marine Frame and the migratory routes of the different seabirds observed on the island, among many other things.

If you are looking for an unforgettable experience with cetaceans, without neglecting sustainability and respect for the sea and these amazing animals… Biosean is waiting for you!