My conservation internship with BIOSEAN 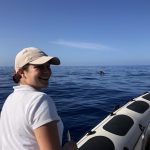 My name is Nadja Hohenadl (@nadja_oceana), I am a marine science student from Scotland (SAMS), born in Germany. I did my conservation internship with BIOSEAN between September & October 2020, in Las Galletas, Tenerife, Spain.

I heard of BIOSEAN (@biosean_) via a German friend and simply sent an email to them as an initial application for an internship. With contact information online it was easy to get in touch so that shortly after I had a telephone call with Misael (@misael.morales.vargas), the boss, who introduced me to their concepts and we came up with a time period I could spend with BIOSEAN.

I booked my flights from Scotland and started packing my diving gear and travel documents with great excitement. My accommodation was a youth hostel about a 15 to 20-minute walk from the harbor of Las Galletas. I chose it myself, and with support from Misael, because he knows the owner of the hostel, I was offered a good price for one month.

Due to CoVid, there were not as many tourists around Tenerife as there could have been, thus Calderón, the boat of BIOSEAN did not leave the harbor every day for its Whale Watching tours. I was informed about the situation before I took off for the adventure in Tenerife, and I wanted to take this chance anyway, during an uncertain time. And it was a good decision!

At the hot spot. Tenerife: One of the best places in the world for watching dolphins and whales

During the first week I was introduced to all boat procedures for the tours we would go on, concerning the 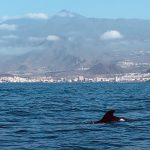 preparation and cleaning of the zodiac (RIB boat). For me and Céline, another intern, Mika (Misael in short) gave a talk on the marine protected area (MPA) we were about to enter. Multiple cetacean (whales and dolphins), turtle and bird species we would encounter during the boat excursions as well as basic scientific knowledge concerning bioacoustics (the sounds of whales and dolphins) were more details we familiarized ourselves with. Most important to remember was how to log information about each animal encounter in a specifically designed spreadsheet while on a tour. With every boat trip I went on it got easier, of course.

I enjoyed listening to Mika´s briefing of the guests prior to each tour, in Spanish or English. He is motivated to not only describe what we would be going to see (wildlife), moreover, he described why the animals live along this volcanic coastline, which is the scientific approach behind BIOSEAN. Due to the perfect environment for deep-diving whales, we encountered pilot whales on each and every single tour out at sea. The south of Tenerife is therefore seen as a hotspot for Globicephala macrorhynchus (Short-finned pilot whale). 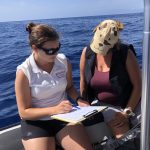 I learned countless facts about local wildlife and the geology of Tenerife. Social interaction behavior of pilot whales, the protected status of marine and terrestrial areas of the island, migration routes of marine birds like the Shearwater, endemic animals of the island… to name a few. Since I started my Marine Science undergrad studies with lectures in marine geology, I became a hobby-geologist. The fact of living on a volcano was thrilling, and even more exciting was Mika´s and my trip to the (almost) top of Mount Teide, 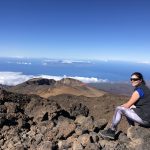 the highest point of Spain – Make sure to get that entry-permission to the national park a few months before your time in Tenerife. Furthermore, I was able to go diving with Mika in the “warm waters” around Las Galletas. Warm water to me because I am used to the cold temperatures of Scottish water. He was able to organize tanks and weights for us and we went on very inspirational boat divingtrips together, saw turtles and stingrays very close. 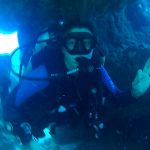 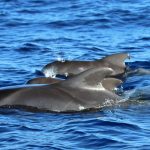 The business side of BIOSEAN is another topic I was curious about, so I asked many questions. In my opinion, it is a great concept to fund science through tourism. Whale Watching and marine science go hand in hand on board Calderón. The internship is perfect for anyone interested in the scientific approach of trying to understand marine mammals and marine conservation, as well as for people who fell in love with the most charismatic animals of the sea and who are passionate about the ocean as a whole. There were no costs involved for me to do the internship with BIOSEAN, which I am very grateful for.

When there were no tours planned for the day, I spent my time in the hostel, doing work for my university course, which was running online at the same time. With fellow travelers from the hostel, I went on hikes and exploratory day trips around the island. We had superb dinners in the hostel followed by relaxed evenings on the nearby ‘Playa de la Ballena’ (beach of the whale), stargazing, and listening to the waves of the Atlantic Ocean breaking on the rocky cliffs. I highly recommend going snorkeling but beware of sea urchins and the powerful waves.

The family of BIOSEAN welcomed me with open arms and made sure I had everything I needed for my stay. I highly recommend the conservation internship with BIOSEAN to all marine mammal conservationists and ocean enthusiasts out there, to follow the passion for the sea.

I will return to the Canary Islands, that`s for sure!

Good luck to expanding BIOSEAN and all the best to Alba and Eva (Mika’s daughters).

It was a great pleasure to be with you.